Buy us a coffee!
You are here: Home / Family / I’m Late Because You Aren’t My Priority

I recently had a friend stop talking to me for four months because I was late to pick her up for a lunch date.

Twenty minutes before I was supposed to be at her house, my father-in-law died.

I called her, explained the situation, and decided to keep the date primarily because I felt like my kids needed to be out of the house when they came to remove his body. 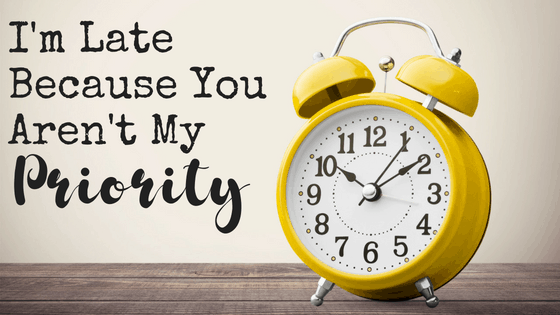 This post, I’m Late Because You Aren’t My Priority, contains affiliate links for your convenience. This means that if you click a link, we’ll receive a small compensation at no additional cost to you. You can read our full disclosure policy here.

Nothing was said during the meal about my tardiness, but in a later phone call, she mentioned that it would be best for us to not see each other or talk for a while because of my habitual tardiness.  She went on to explain that it’s unfair to blame my kids because when her kids were small she still managed to be punctual.

She said that I’ve always been late and that it shows that I really just don’t care about people.

I did the typical thing when we hung up and went and cried to my husband.  Literally.

And for weeks, this bothered me.

It nagged at me in the back of my mind every time we were getting ready to leave.

The MDO teachers are going to think you don’t care about the kid’s craft projects or social interactions if you don’t get them there on time.

The librarians are going to think you don’t care about books if you don’t turn them in on time.

Always Late But Worth The Wait - Funny Turtle T-Shirt

So I tried extra, super, amazingly hard to get us out the door on time.

After all who wants to be the kind of person that doesn’t care about people???

So I got up an extra hour early in the mornings.

I packed lunches and backpacks the night before.

I laid out everyone’s clothes on the couch so I could make sure they weren’t piddling around in their rooms instead of getting dressed.

I bought protein bars instead of cereal for breakfast.

And you know what?

We were still late.

But on top of tardy, I  was exhausted and short tempered.

Pressing Pause: 100 Quiet Moments for Moms to Meet with Jesus

Because my kids didn’t get the memo that my character had been called into question due to our tardiness, they kept acting like kids instead of soldiers ready to be on time to a battle.

Someone would need to potty, spill something, or some other shenanigans as we were on the way out the door. Once my son even had the audacity to misplace a shoe. Whoever heard of such a thing?

And my short on Jesus and sleep self would yell at them to fix it which usually resulted in crying.

Related: A Fraudulent Pastor’s Wife and a Fanatic

And as I was talking to my husband about how our kids were ruining my attempts to fix my sullied reputation, he asked me two questions.

“Do you care about people?”

And then I saw it.

In my attempts to make sure other people, outside of our family, felt like they were important and cared for, I’d stopped putting my kids first.

So I gave up on being on time.

And I’d be lying if I said that I don’t care at all what people think.  I truly hate walking in late, mostly because everyone looks at me and then I turn 12 shades of red and start sweating profusely.

I absolutely care about people, but I’ve learned to prioritize who I care about most.

And the obvious answer is my family.

But if my actions don’t support it and I’m screaming like a banshee over some spilled water, how in the world will they know that they are more important to me than almost anyone else?

I’ve written before about how my most important jobs are wife and mother, so if my three-year-old takes an extra ten minutes to get dressed because she wants to wear two tutus and it took her a while to figure it out on her own, I want to celebrate that she did it all by herself!  Not yell that we’re late because of her being slow to get dressed.

Heavenly Minded Mom: A 90 Day Journey to Embrace What Matters Most

People keep telling me that the years with kids in your home fly by so quickly.  And I know that to be true.  My oldest is nine so she’s halfway to being an adult.

Which makes it all the more important that I model what I want to see in them.

But seriously, I want my kids to be like Jesus, and he was late quite often.

Like that time he was so late to heal his sick friend, Lazurus, that Lazurus died waiting on him.  People were beside themselves.  But here’s the thing, with Jesus being God and all, he knew exactly what was going to happen.  So maybe he wasn’t late.  Maybe his timing was perfect and everyone else thought he was late.

And please don’t think I’m comparing my arrival to Jesus raising his friend from the dead.

I’m just saying that Jesus was doing important work where he was and he didn’t drop it all and dash away to avoid being late.

The greatest calling in my life right now is to be a good wife and mom.

Related: How to Balance Kids and Marriage

I’m not a spy who needs to be at the rendezvous point at the precise moment to intercept a bomb.

I’m a mom driving kids to church and play dates and dinner with friends.

I cannot be a good mom if I let a clock run my life.

There are going to be blown out diapers, spilled drinks, lost shoes, and runaway dogs as we try to leave. 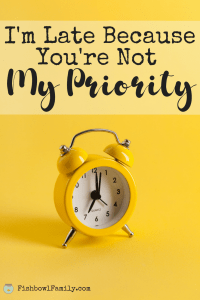 The people in my life who know me best know that my tardiness is not a sign of my uncaring.

Those are the people I want in my life.

I want the people who say, “Honey, it is fine that you’re late. I think you are worth the wait.”

See, those people show me the fruit of the Spirit in having patience. Go ahead and look. Punctuality isn’t there, but patience is.

Maybe y’all are better at multitasking than I am, but for me, I have to choose the one thing that’s important in that situation – my kid’s hearts or arriving on time.

And I’m choosing my kids.

Being late is not the worst thing.

Being mean about being late is much worse.

So I’ll continue to arrive later than I’d like as long as my kids are with me. Maybe this is just a season of life. Maybe when they’re older and more independent we’ll be on time.  But if not, it will be okay with me.

My priority will always be their hearts and not punctuality.