Buy us a coffee!
You are here: Home / Finance / Where to Get Inventory for eBay

Where to Get Inventory for eBay

In our previous post, How to Make an Extra $100 a week on eBay, we gave our five tips for selling on eBay. 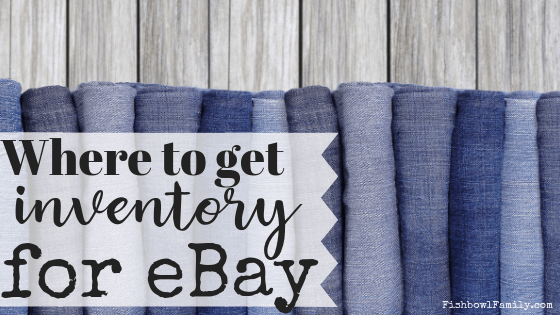 That’s all well and good for making money on the things you’ve got laying around your house, but what about when you clear out all your extra clutter?

Has that actually ever happened?

Again, this is what has worked for us, not an exclusive list.  If you find other places, tell us in the comments!

Depending on your shopping style, this can be an all-day excursion.

I love shopping, so I have to limit myself or I’ll spend hours roaming around.

I usually take my kids because they love shopping as well and that significantly limits our time in a store.  They can get board games, books, toys, and other cool stuff for way cheaper than they’d get them at other places.

Another benefit of shopping at thrift stores is that I’m able to get clothing and stuff for my family super cheap.

I’m not there to find kid’s clothes, but if there’s a pair of Gap jeans in my son’s size for $3, I definitely buy them.

The best things I’ve found to resell at thrift shops are jeans, shoes, and purses.

I once found a Dooney and Burke purse for $8 at Goodwill!

These things are ideal because they don’t take up a lot of space to store at home and they’re easy to ship.

I’ve also found success with some glassware like carnival glass and Fiestaware.

Also, a lot of thrift stores will have days that certain things are an extra percentage off.  I always try to go on those days even though it’s a little bit busier.

Garage sales are not my jam.

I don’t like getting up early, talking to people, or driving around.

I do know people that have made a full-time business out of picking up garage sale leftovers.

And I can totally see how profitable that would be. But it’s also a pretty big commitment because you have to take ALL THE STUFF.

But if you already like garage saling (is that a word??), then they are a great place to get inventory for eBay.

They’re good for all the same reasons as thrift stores with the added bonus that you can haggle with people.

If that’s your thing.

When I first started making money on eBay, I was so excited that I told basically everyone I knew.

This ended up being great because a lot of people just gave me stuff to sell that they didn’t want in their house anymore but didn’t want to just throw away.

I also sold some high dollar items for people and we split the profit.

I usually do a 50/50 split and no one has ever had a problem with this.

So being vocal about your new side hustle may get you some extra business or some free stuff!

There are a couple of ways I’ve made money off of Thredup.com.

On their homepage, they have a tab labeled “Rescues.”

On this page, they sell boxes of items that need a little TLC, they have multiples of, or have been listed on their site without selling for a while.

So you can choose boxes of purses, shoes, or clothes at pretty great discounts.

I typically order a box of clothes in my size, keep what I like, and sell the rest.  With the purses and shoes, I do the same thing.

The larger the quantity you buy, the cheaper the cost per item.

I’ve ordered several boxes and there is a pretty fair mix of value.  For example, there may be a purse worth $50 and one worth $8.

They also have sections for baby clothes, outerwear, toddler clothes, accessories, and jewelry.   I’ve never ordered any of these boxes, but I’m sure the quality is just as good.

People often post things for free on the Facebook Marketplace and Craigslist just to get it out of their life.

I know I’ve done that when I didn’t have the time to deal with it.

If you are committed to searching and dealing with people, you can get some great deals here.

Even if it’s not stuff for free, you can buy stuff cheaper on Craigslist or Facebook Marketplace and then turn around and sell it for a profit.

You’re trying to sell stuff on eBay, not buy stuff from eBay.

But bear with me.

Sometimes people want to get rid of a lot of stuff at once, so they’ll list a big lot.

That lot could easily be broken down and sold individually for a profit.

To find lots of stuff to buy, just search for “whatever LOT.”

To get stuff even cheaper, make an offer.

(An offer is different from a bid because you’re offering less than their starting bid.)

A lot of people selling on eBay will have their stuff set with a starting bid price, but they’ll also accept offers.  So it never hurts to make a lower offer.

The worst they can do is reject your offer, and then you don’t get it for that price just like if you don’t make the offer.

When people make me an offer, I always counter with a slightly higher price.

So be prepared to haggle a little.

I don’t totally understand it, but I do go along with him because I enjoy spending time with him.

I think part of the appeal for him is that he likes to haggle.

The idea of haggling makes me feel clammy, so I let him do ALL the talking.

On a recent trip, I noticed that there were a lot of name brand purses for sale.  Some were at a steep enough discount that I made a pretty good profit on eBay.

After seeing the potential in their handbag section, I began to look at the store with fresh eyes.

There were lots of things in the place that could easily be sold for a profit on eBay!

Especially if you’re good at talking down the price! (Or if you have a husband that’s good at it!)

When you return something to Amazon, they don’t always relist it.

They do have a really cool warehouse section with discounted open box items and refurbished electronics, but a lot of their stuff is sent to Liquidation.com.

This is the only thing on this list that I haven’t actually done myself, but I do plan on doing in the future.

(We’ve recently moved and are in the process of renovating the house we are living in so I just don’t have the space to store inventory right now.  Well, I do, but it would be covered in sheetrock dust and sawdust.)

So the way the site works is is a lot like eBay.

You make bids on big lots of stuff that has been returned to Amazon.

The big drawback is that they only post about three pictures of the items.  And the photos are of overstuffed boxes so you really can’t tell anything about the stuff.  However, they also post a manifest with every item in the lot and its value on Amazon.

So this is a great idea once you find your niche on eBay.

Here’s what I mean by finding your eBay niche. You can’t be an expert at all things, so I recommend selling things that you already know a little about.

For me, this is purses, clothes, and shoes.  So when I get some space, I’ll order a box of stuff that falls into those categories.

If I had to learn about car parts or electronics, I’d really hate it.

But I have a friend that consistently acquires broken motors from small engine machines like lawnmowers and boats and repairs them. He then sells them at an amazing profit margin.

He likes repairing motors and makes great money doing it. 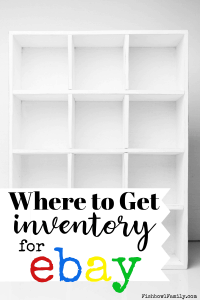 So after you’ve cleaned out your own house, use the money to reinvest in your eBay business and buy some things.

Try to keep your listed inventory up and your overhead low.

By selling your own extra stuff first, you’ll never be out any money.

What is your favorite place to get inventory for eBay?  Tell us in the comments!

How I Made an Extra $955 for Christmas

Must Read Finance Books for Christians

Why I Love My Broken Coffee Pot: One Small One to Reduce Debt