Buy us a coffee!
You are here: Home / Family / Six Things to Watch on Netflix This Summer That the Whole Family Will Enjoy

Summer is my favorite season.

I love how time slows down just a little. 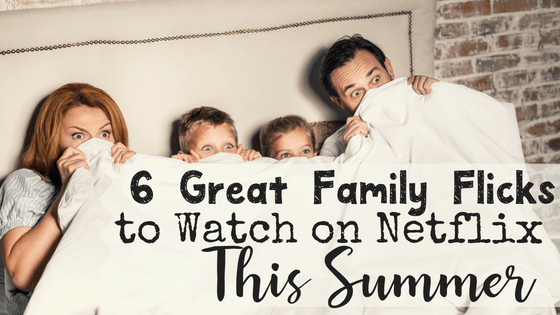 This post, The Six Best Family Friendly Shows on Netflix This Summer, contains affiliate links for your convenience. This means that if you make a purchase using our link, we will earn a commission at no additional cost to you. Read our full disclosure policy.

We are still incredibly busy, but there’s at least one night a week that we make time to eat some homemade popcorn and watch a movie or show together.

With kids ranging in ages from nine to two, it can be difficult to find something that the whole family enjoys.

And I’m saying the whole family so the age range is actually thirty-nine to two.

In addition to the huge age range, it’s also important to us that the things we watch line up with our Christian values.  I don’t want to spend my whole day encouraging my kids to behave like Christians, and then show them a movie that undermines it all.

While this can seem like an impossible challenge, you’re sure to find something in this list that your whole family can enjoy as well.

So pick a night to make some popcorn, drag your bean bag chairs to the living room, and enjoy a movie together.

The films are done so well because that’s kind of Disney’s thing.  And while they are true to nature, they are done more age appropriately than some other nature documentaries.

The information is captivating, the music is beautiful, the cinematography is superb, and the animals are amazing.

We all learn something new every time we watch a Disney Nature film, and even our two-year-old enjoys them.  I’d always assumed that my kids would be kind of bored with them, but they were entranced.

I guess I should have expected that because zoos stay in business.  Kids love animals, and Disney does a great job with these documentaries.

If you’ve never watched a Disney Nature film with your child, be prepared.  There has been a death in every single one I’ve seen.

This doesn’t bother me because my children know that death is a part of life.  Their grandpa died a few months ago and they dealt with that amazingly well, so I’m not too concerned with them seeing some birds die.

They do express sadness over the deaths, but since we are right there with them, it’s never been an issue.

Just like the original, this version of Benji is about a scrappy little dog who is basically a genius.  He is taken in by siblings and then saves them when they get kidnapped.  It’s heartwarming and made me hug my own little dog a bit tighter before bed that night.

Again, my kids love animals so this one was a no-brainer.

Ok, you have to suspend your disbelief about the intelligence of a dog for a couple of hours.  It’s farfetched, but he doesn’t drive a car or dismantle a bomb or anything like that.

The only scary part was that the kids got kidnapped because they disobeyed.

And you better believe I used that as a teaching opportunity to remind my kids that disobedience can get you kidnapped.

They were on their best behavior for like twelve hours the next day.

This is the film adaptation of the short story by Roald Dahl.

It’s about a Big Friendly Giant which leads one to (correctly) assume that there are Big Unfriendly Giants as well.

The unfriendly giants cause problems which is the central conflict of the movie.

To ensure that you’re children aren’t scared, I suggest reading the book with them first.

Its a pretty quick read and my kids love watching the movie after they’ve read a book.  It makes them feel very smart (and much less anxious) to know what’s coming next.

Netflix has a show right now called Brain Games that is pretty great.

My oldest two LOVE it, and my youngest two copy them and pretend to love it.

But he is constantly challenging the viewer to do different things that require some pretty keen observation skills.  It’s a very interactive show so my kids are on their feet a lot because they jump up to count, to look closely, and try to outsmart the tricks.

I manage to stay seated while performing the challenges, but I also lose to the kids quite often.

So maybe I should start hopping while counting footballs?

This Netflix original series is based on the hit book series Anne of Green Gables.

It’s the story of an orphaned girl named Anne and her quest to find a family.

It’s well acted and moving.  Since it’s a period piece, it helped to teach a bit of history to my kids as well.

I love any show that helps my kids to be grateful and this one certainly does that.

Anne is a very honest girl and has strong morals despite her wretched beginnings.  That is a quality I want my kids to emulate so I’m going to try to put that in front of them at every chance.

This Netflix original is a reboot of the 1960’s classic show of the same title, and it may not be appropriate for the youngest of viewers. It’s rated TV-PG so that’s up to you to decide.

There’s nothing sexual or overly graphic or even too scary, but there are several intense scenes with implied danger (i.e. a man is launched out into space without a spacesuit and a woman is charged with his murder in a later scene).

My kids aren’t bothered by it primarily because the entire premise of the show is fantastical.

The show focuses on the Robinson family who gets lost on their journey to a new space colony and ends up stranded on an unknown planet.  They work together to survive with every member of the family contributing to their success in each episode.  They are loving and kind which is a refreshing change of pace from the multitude of shows for kids where siblings are horrible to each other.

The kids in the show aren’t perfect.  Many times we have stopped the video and asked, “Is what Will just did the best thing?  How might he have acted differently?  What do you think might go wrong because of his deception/lack of trust/stubbornness?”  Thankfully, the consequences faced in the show support the moral lessons we are trying to teach. 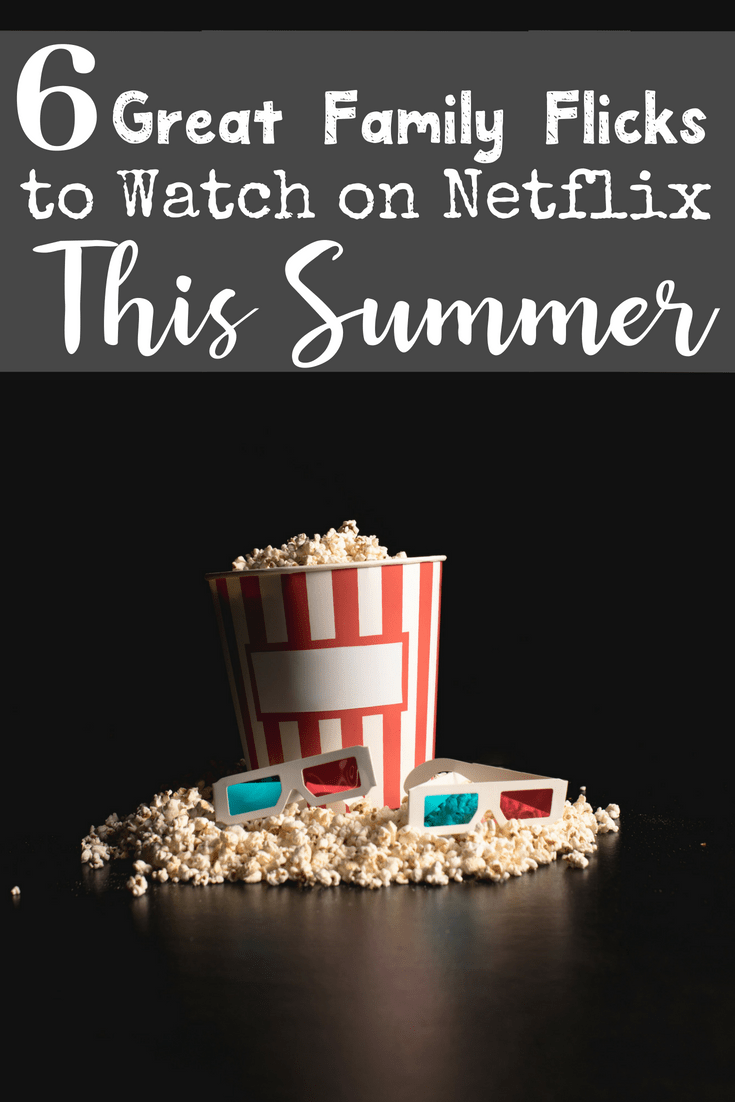 It’s easy to get swept up in being busy, but some of my favorite times with my kids are the slow nights at home watching a movie together.

Not only is it expensive and a difficult to take our family of six to a movie theater, it’s unnecessary.  My kids are totally happy watching a movie at home in their pajamas.  If we add some homemade popcorn and a pillow palace (every pillow, blanket, beanbag chair, and soft thing in the house stacked up in a pile), they are over the moon.

Life can be as simple or complicated as you make it.

As for me, I’ll be over here loving summer in my comfiest pajamas, eating some $.63 popcorn, snuggled up in a giant pile of kids and pillows, watching great family friendly shows on Netflix.

What are your favorite family friendly shows on Netflix?  Tell us in the comments!