Buy us a coffee!
You are here: Home / Ministry / Dad's A Pastor / How to Talk to Your Pastor About His Child

How to Talk to Your Pastor About His Child

I am the mother of four extroverts.

This is amazing to me because I am not an extrovert. 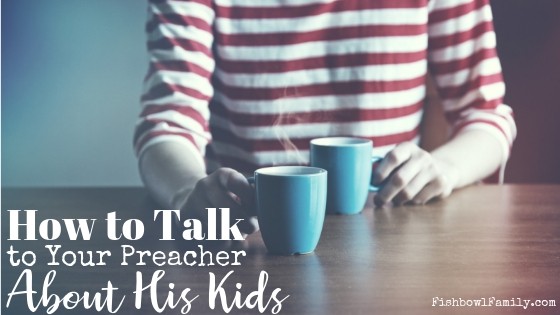 I’m so introverted that I don’t like calling to order pizza or placing orders at the drive-thru or making small talk with cashiers. (I’m not sure why all my examples revolve around food…)

But all four of my kids love talking to people.

Which is great…..most of the time.

One big drawback of their extroversion is that I am often sincerely concerned about them getting taken by a stranger.

Like I worry that we’ll just be at Walmart and one of them will start chatting with a stranger about the new store layout and the stranger will just low key lead them out to their car while my kid is cheerfully chatting away.

Part of the problem with my kids being extroverted is that they are talkers – to the point that they sometimes won’t stop.  Like in Sunday school or Wednesday night or big church.

They’ve all gotten in trouble at church for not being quiet when it was time to listen to the lesson.

They get in trouble at home for not being quiet.

And I’ve worked with children’s ministry before.

All kids are a little bit chatty and struggle to hush when it’s time.

It’s normally not a big deal.

Here’s where the issue arises for our family.

My husband is the pastor, and people really don’t like telling the pastor that his kid was misbehaving at church.

They’re just not sure how to talk to the pastor about his child.

But it’s a real Catch-22 for the teacher.

See if they don’t tell us about it and we hear it from the kids, it’s probably not going to be the whole story.

But if they do tell us about it, they have to have a really hard conversation with their pastor about how his child screamed “SHUT UP!!!” to another kid in Sunday school and made her cry.

Talking to the pastor about his child’s misbehavior does not bother some people at all.

I love those people.

People who are like, “Hey.  Just wanted you to know that your kid called me a butthole today and told me that they hated Curious George because monkeys are stupid.  They went to time out, and then they apologized and we ate animal crackers together.”

Like it’s no big deal that my kid said three words IN CHURCH that he’s not allowed to say at anywhere ever.

And here’s the other thing I love about these people.

They treat my kids just like any other kid.

My kids have enough issues being in a pastor’s family.

The Baptist News posted a really great article about the complicated nature of being a pastor’s kid.

The amount of stuff my kids pick up on is impressive and a little frightening.

My husband gets phone calls 24/7 and he always moves to another room so we can’t overhear his end of the conversation, but they see the names on caller ID and can deduce what the conversation was like from how their dad looks when he comes back in the room.

When he gets the news that someone is dying or a marriage is falling apart it impacts him.

They pick up on it, and it impacts them, too.

People come up and talk to us in front of our kids as if our children cannot comprehend the words they’re saying.

And for the most part, our kids do a fantastic job of keeping home words at home.

So it means the world to us when their church teachers treat them exactly like the other kids.

I hate when people say they “expect more” of my kids.

They are still just kids.

Expect the same from them as from others.

Please don’t give them a pass because they’re beautiful and burdened with a pastor’s family life.

God chose them for this life and is molding them into the adults he has called them to be through our family experiences.

Don’t mess up that process by giving them a pass on behavior so you don’t have to have a conversation with the pastor about his wild children.

So hold the pastor’s kids to the exact same standards as the other kids and you will have a much easier time talking to him when his kid misbehaves.

Because his kid will misbehave.

They’re kids after all.

Here are five tips to help you talk to your pastor about his kid(s).

Make sure the conversations happen:

Make sure to talk to your pastor in private.

Don’t talk in front of other people about what his child did.

Don’t talk in front of the child.

That’s awkward and humiliating for everyone.

Talk to your pastor about his child as if you are talking to any other adult about a child – while the child is not present.

Your goal is to let the pastor know that his child has behaved in an unacceptable way.

So there’s no reason for you to have the conversation in front of the child.  That will drive a wedge between you and the child because they will see you in a negative light after watching you “tattle” to their parent.

It may be tempting to tell the story to someone else.

Not as gossip, but just because kids say and do funny things.

After all, the pastor tells stories in front of the whole church.

You may not realize that most pastors get the blessing of their families before they tell those stories. So, be sensitive to how your story may shape that child’s reputation and trust in you.

You want to talk to your pastor about his child’s behavior as soon after the incident as possible.

You want to tell the parents before their child does so that if/when their kid comes to them, the parents already know what went down.

This helps to reinforce the child’s belief that every adult at church is on the same team – We are all Team Church or Team Get Kids to Act Like Jesus or at least Team Keep These Kids Out of Jail.

The only caveat to this is that you do not want to talk to the pastor right before they preach.

So if something happens in Sunday School, don’t dash to the sanctuary to have a quick chat before he goes up on stage to deliver his sermon.

Most pastors go into a “preacher zone” on Sunday mornings where they are just praying and running through their sermon.

That means that he’s not going to give you his full attention, and you might distract him from delivering God’s Word to his best ability.

Catch him after church even if you have to wait for him to shake 423 hands.  (Is that just a Southern thing??)

Try to sum up what happened in 60 seconds or less.

More than likely you are talking to them at church and there are 481 other things going on.

Don’t start a story hour to tell about their kid’s behavior.

You want to give them the abbreviated version and, rest assured, they will be grilling their child when they all get home.

It’s okay to give advice if they ask you for it or if you feel like God has laid something on your heart to tell him.  And yes, it will be a bit intimidating to tell your pastor how to parent.

But remember, he too, is human and this is his first time parenting that child, and God put you on the team to help disciple that kiddo.

No this isn’t just a repeat of number 2.

By immediately, I mean to let the pastor know that their child is misbehaving as soon as their kid misbehaves, not after they’ve been shouting at kids for 13 weeks.

If you want to give some grace and offer a free pass on the first misbehavior, cool.

But don’t wait until their kid has been steadily acting up for three months to bring them in on it.

At that point, it’s a pattern of behavior and it’s a much bigger deal.

It’s harder to break and it makes the pastor trust you less because you didn’t come to him immediately so that he could help you and his child.

Try to figure out a way to explain the incident in a completely honest way that is also positive.

Your pastor is already living under a microscope or you might even say in a fishbowl. (Get it??)

To hear that your child is the bad child at church is tough for any parent, but it really shakes up the pastor’s family.

It puts doubts in his head about his ability to do ministry at all if he can’t keep his kids from misbehaving at church.

So find a way to talk positively about his child.

Even if it’s just saying kind things about the child at the beginning of the conversation before hitting him with the truth of the incident you need to discuss.

You and the pastor (and every parent) are on the same team. (Have I mentioned that?)

If you keep that team mentality, then it’s not a big deal to let a team member know that one of the players needs some help at home.

You are a Christian that is mentoring younger Christians or helping to lead young kids to become Christians.

That is not a job that can be done alone.

That needs a whole team. Don’t handicap the team by keeping the kid’s dad on the bench just because he is the pastor.

Have you ever had to talk to your pastor about his child(ren)? How did it go? Tell us in the comments!

WANT TO REMEMBER THIS?  SAVE HOW TO TALK TO YOUR PASTOR ABOUT HIS CHILD TO YOUR FAVORITE PINTEREST BOARD! 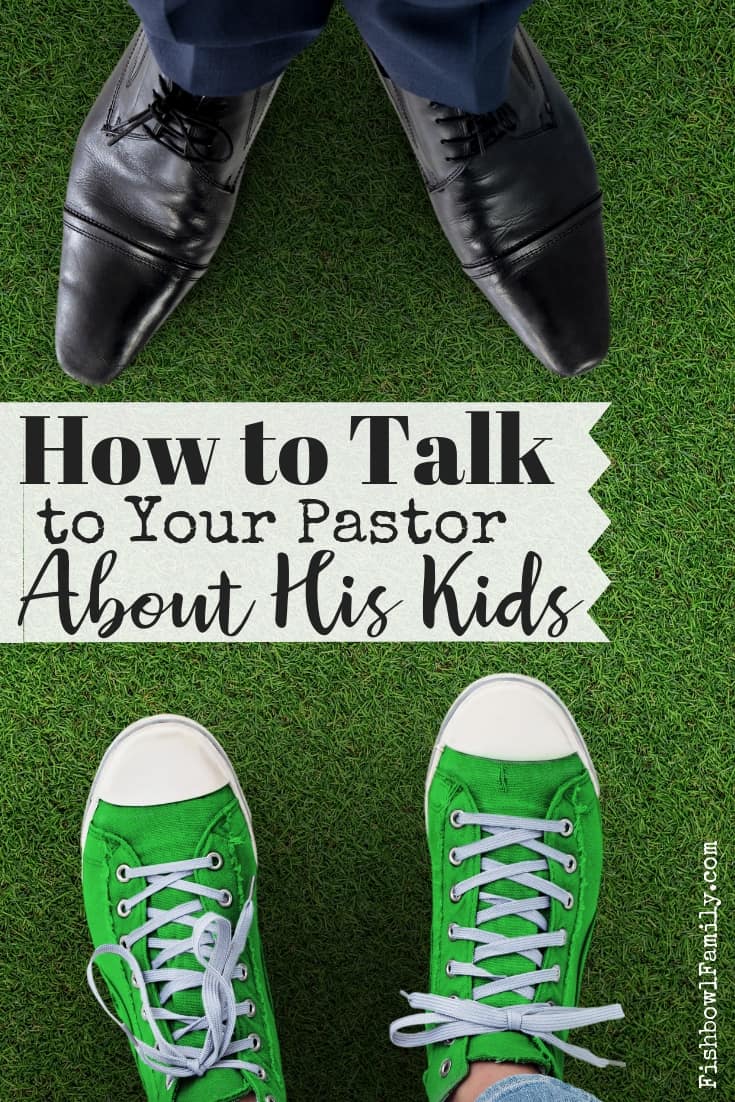 Accidentally Teaching Your Kids to Pray

How to Help Kid’s Memorize Scripture

10 Great Gifts for the Pastor’s Wife

How To Balance Marriage and Ministry

Are Pastor’s Really Held to a Higher Standard