Buy us a coffee!
You are here: Home / Family / Homemaking / The Life Changing Magic of Giving Up

The Life-Changing Magic of Giving Up

As I mentioned before in my post about quitting minimalism, I grew up with a mom that would relentlessly clean out.

And now, with four kids of my own, I get it.

I often think that if we didn’t have so much stuff, it would be much easier to keep the house clean and perfect.

But I don’t think that getting rid of everything extra is the solution.

My job as a parent isn’t to pare down our belongings until it’s possible to keep all four of our shirts put away. 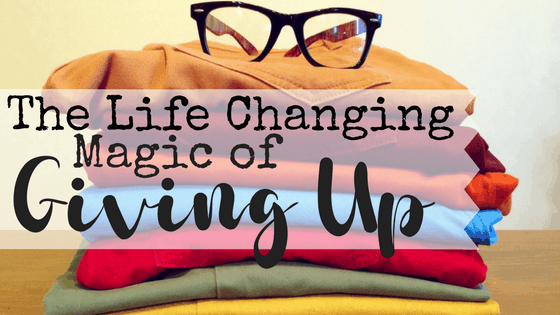 My job is to teach my kids to put away their own shirts regardless of how many there are.

But with kids ages 2 – 9, that isn’t actually an easy thing to do.  So, for years, I’ve struggled with laundry.

I’m great at washing and drying the clothes, but I stink at folding and putting away the clothes.  It seems like such an exercise in futility.  I’m supposed to empty a basket of laundry to fold the clothes and deliver them to one of four bedrooms to put them in one of six drawers?!?!

So more often than not, we have had baskets of clean clothes lined up on the hearth of our fireplace.  I’d learned to not let housekeeping steal my joy, but it still bothered me to see those baskets there.

One day while whining to my husband, I said, “I just wish we had open shelves and each kid had like six baskets to put their clothes it.”

And this may sound silly to y’all, but actually selling the dressers to get baskets and shelves hadn’t occurred to me.

Because everyone has dressers.

You don’t just sell all your dressers. 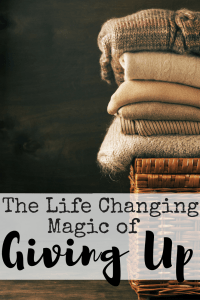 But that’s just what we did.

We sold all of our dressers.

I listed them on Craigslist and the Facebook Marketplace and they were gone in a few days.  It wasn’t a big deal since that’s where most of them came from anyways.

Then the real fun began.

And then I ordered each kid six large fabric baskets.  We chose these because they are light weight, they’re lined in case something gets spilled in them, they have two handles, and they came in four different colors.

And here’s where the real magic happens:

When it’s time to fold and put away laundry, I designate a spot on the couch for each kid’s clothes.  I take the clean laundry out of the basket and throw it in one of four piles.  Each of the three older kids takes their own clothes and puts them in the right basket.

No, they’re not folded.

Yes, sometimes the three-year-old puts her clothes in the wrong baskets.

But she did it herself!

And it’s not that hard to see that there’s a t-shirt in the pants basket and switch it.  In fact, she often notices the mistake later and corrects it herself.

And that’s the thing, friends.

My three-year-old is learning to take responsibility for caring for herself.

That’s literally one of the main points of parenting.

And as much as I loved opening their dressers and seeing all their shirts folded KonMarie style, it was stressing me out.

They couldn’t fold their own clothes or put them away because they had to be done just right to be able to fit in the drawers.

They looked amazing when I was finished, but it was all on me to finish.

I’ve got enough on me. 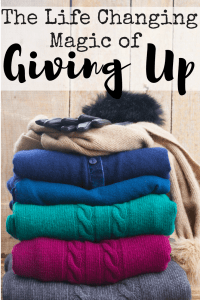 And don’t get me wrong, I enjoyed The Life-Changing Magic of Tidying Up.

The Life-Changing Magic of Tidying Up: The Japanese Art of Decluttering and Organizing

When going through our stuff, I frequently ask myself, “Does this bring me joy?”  And if the answer is no, I pass it along with zero guilt.

Which is huge because I am the queen of feeling guilty.

And I’m not saying that you have to stop folding clothes.

If folding laundry is soothing to you, keep it up.

My friend, Claire, loves folding laundry because she folds it while watching Netflix after her kids are in bed. She says it’s her time to relax without feeling guilty because she’s still being productive.  I love that!

The point is this – make deliberate parenting decisions.

Don’t be shackled to conventional solutions for your problems.

Who cares if people have been storing their clothes in neatly folded bundles inside of dressers for hundreds of years?

For our family, that wasn’t the best solution for our laundry situation.

Commit to training your kids to be awesome adults.  That takes an immense amount of forethought and effort, but it’s the whole point of parenting.

Dedicate the time and energy to make sure you are being intentional with the limited time you have with them.  Model clear priorities for them.

Want to make your marriage a priority?  Model that.  Go on dates when you’re tired and just want to put on your sweatpants.

The Meaning of Marriage: Facing the Complexities of Commitment with the Wisdom of God
The Seven Principles for Making Marriage Work: A Practical Guide from the Country's Foremost Relationship Expert
Enter the Ring: Fighting Together for a Gospel-Saturated Marriage

Want to make hospitality a priority?

Have people over even if the house isn’t perfect.

If you find yourself looking around wondering how your life so busy or crazy or whatever, stop and re-evaluate.

If something you are doing isn’t working well, change it. 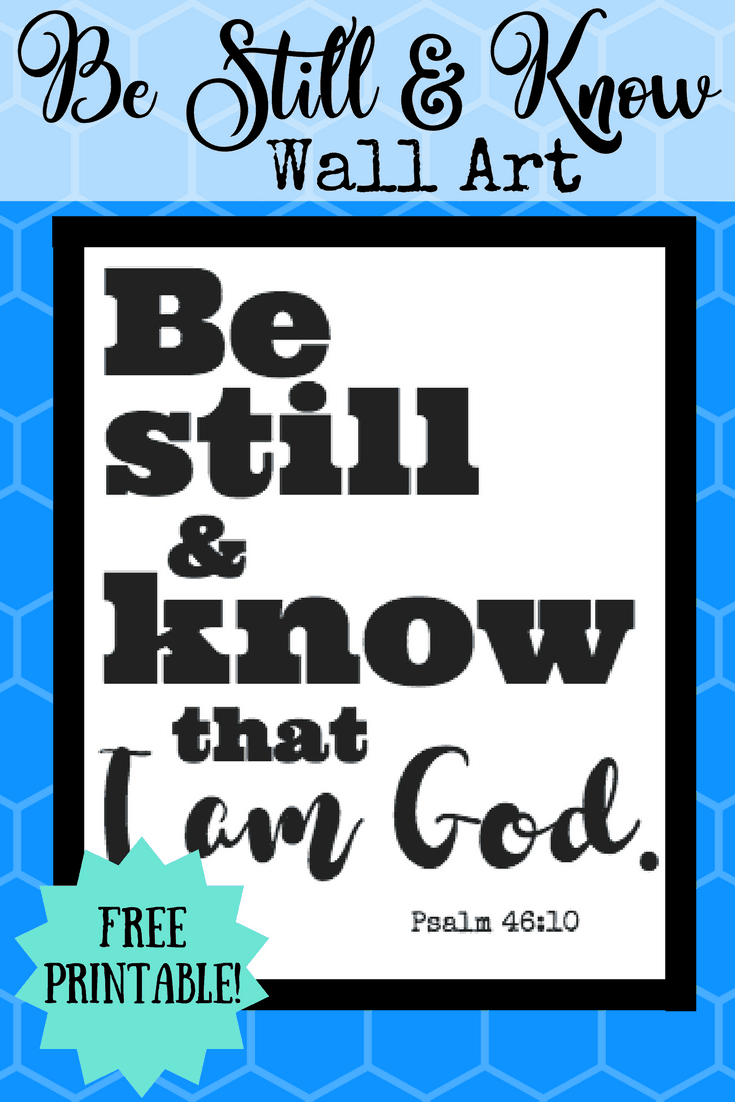 Who cares if everyone else keeps their clothes in drawers?

We keep ours in baskets on metal shelves and it works great for our family.

What creative solutions has your family found for your unique situation?? Tell us in the comments!