Buy us a coffee!
You are here: Home / Family / When a Christian Dies

My husband’s dad is dying.

And not in the way that everyone is headed towards an eventual death.

He is actively dying.

His life is now being measured in hours.  He is in a hospital bed in his bedroom of thirty years, hooked up to oxygen.  He is given pain medicine every few hours, but he still cries out in pain more often than we’d like.  He’s past the point of recognizing anyone or communicating clearly, and he hasn’t taken more than 10 ounces of liquid in days.

Our family has all come together to be here until the end.  For the first time in three decades, all four of his children are sleeping under one roof.  All fifteen of his grandchildren have hugged their Pa for the final time. 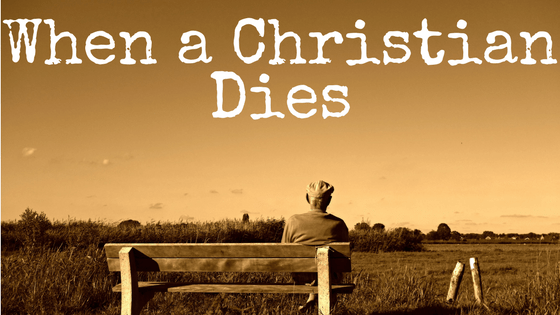 Friends from decades have filtered in and out to say their goodbyes.  They’ve sat by his side and told stories of their time together.  They’ve cried and hugged and said goodbye to a man who has been a friend to so many.

And yet this house is filled with joy.

We are sad for our temporary loss, but we all know we will see him again one day in heaven. When his body is not broken and tired. When he can run and jump and dance.

“Where, O death, is your victory? Where, O death, is your sting?”  The sting of death is sin, and the power of sin is the law.  But thanks be to God! He gives us the victory through our Lord Jesus Christ. Therefore, my dear brothers and sisters, stand firm. Let nothing move you. Always give yourselves fully to the work of the Lord, because you know that your labor in the Lord is not in vain.” – 1 Corinthians 15:55-58

And that’s the thing Dillon did. He labored for the Lord and loved people. He often used a harsh tone and he could make the meanest faces I’ve ever seen.

But he also gave until it hurt.

This house has been filled with stories of Dillon’s generosity.  Some are old favorites and some we’d never heard until visitors shared them with us.

My favorite is the one about Dillon giving a homeless man the coat off of his back.  Everyone loved to tell that story, and the only comment he ever made about it was to say that he was really cold that winter.

So even though I want to shout the words of Dylan Thomas:

“And you, my father, there on the sad height,
Curse, bless, me now with your fierce tears, I pray.
Do not go gentle into that good night.
Rage, rage against the dying of the light.”

Instead, I will strive to live more like Dillon Anthony because he was striving to live like Jesus.

I will give more freely of my time, money, and resources.

I will work harder.

I will expect the worst of people and love them anyways. Because they’re all sinners – just like me.